HISTORY OF THE ACADEMY OF DENTAL MATERIALS 1985

THE ACADEMY OF DENTAL MATERIALS

The Academy was founded and held its first meeting on February 16, 1941. The president was Dr. E. Byron Kelly. The Academy was a consortium of dental professionals who were interested in the development and application of the relatively new plastic materials to dental care. Its name from 1941 to 1983 was the American Academy for Plastics Research in Dentistry. It held its annual meeting and scientific sessions in conjunction with the Midwinter meeting of the Chicago Dental Society.

Table 1 is a chronological listing of the Presents of the American Academy of Plastics Research in Dentistry. It is important to note the contributions by Dr. LaMar Harris and his wife, Florence Harris. For many years they were largely responsible for the coherence of the Academy and the organization of its annual meetings. In addition to serving as President in 1944 and 1945, and the first Secretary, Dr. Harris served as secretary from 1950 through 1972. Mrs. Harris served as executive secretary from 1959 through 1972. The Academy was reorganized and broadened its scope in 1983, as the Academy of Dental Materials, under the leadership of Dr. Evan H. Greener and has become an international academy.

Table 2 is a listing of the first officers and executive committee of the Academy of Dental Materials who are responsible for the reorganization. The Academy was originally headquartered at Northwestern University Dental school and was incorporated as a non-profit corporation, under the laws of the State of Illinois, on April 12, 1984.
The Academy is now headquartered in San Diego, California 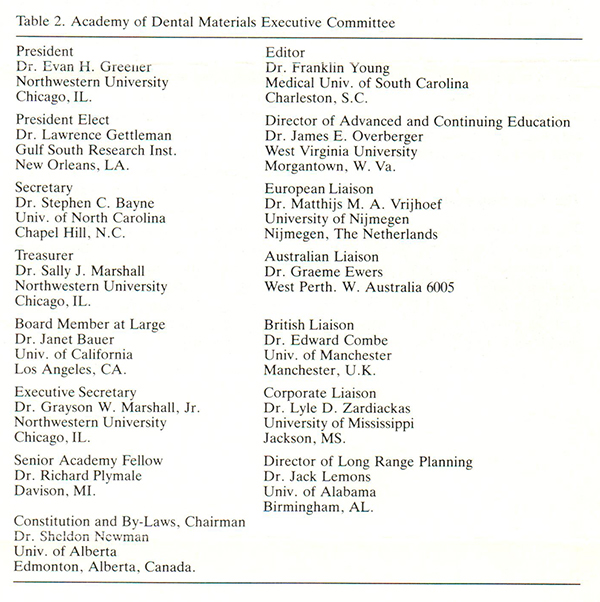 The objectives of the Academy are: 1) to provide a forum for the exchange of dental materials; 2) to enhance communication between industry, researches and practicing dentists; 3) to encourage dental materials research audits applications; and 4)to promote dental materials through its activities.

The new name of the academy reflects its purpose and general interest in dental materials. The new seal of the Academy reflect this new commitment as well as its respect for the past. The seal, as shown in Fig. 1, consists of a shield encircled by the name of the Academy and the dates ’1941’ and ‘1983’, indicating the founding date and the reorganization date, respectively. The seal is divided into two major parts. The left-hand side consists of black and gold waves, symbolic of the polymer chain for plastics and the previous scientific award of the ‘old’ academy. The right half of the shield represents the reorganization academy and consists of a blue field with three stars, representing metals, polymers and ceramics. The three stars are set in a triangular constellation, the triangle symbolic of dentistry, and their configuration representing a composite of dental materials, indicating the many interactions and combined uses of these materials in dentistry.

Want to become member? Click “Join or Renew” below for more information, including fees and how to sign up.